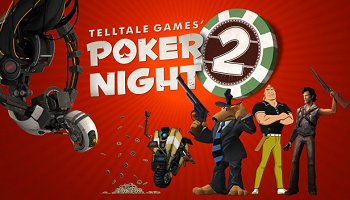 So, an Irish Wolfhound detective and his insane lagomorph friend, a talkative Pandoran robot, a zombie-fighting department store clerk and a former bodyguard with a license to kill walk into a bar with a table run by an incredibly murderous and corrupt AI...

Poker Night 2 is the sequel to 2010's Poker Night at the Inventory, only this time with the player up against Claptrap, Sam, Brock Samson and Ashley "Ash" Williams in Texas Hold'Em or Omaha, with GLaDOS being the dealer. Returning from the previous game are Reginald Van Winslow (who is now simply hosting the game) and Max (who is now watching from a table and mocking everyone else). The game was released on April 24, 2013 for Xbox Live Arcade, April 26, 2013 for Steam, and April 30, 2013 for PlayStation Network, with an iOS port released in May, but is no longer available online after the license expired.

Gla DOS: THE TROPER HAS RUN OUT OF EXAMPLES TO READ AND MUST NOW LEAVE THE PAGE BEFORE EVERYONE STARTS LAUGHING.
Winslow: Please accept these indexes as a sign of our appreciation.