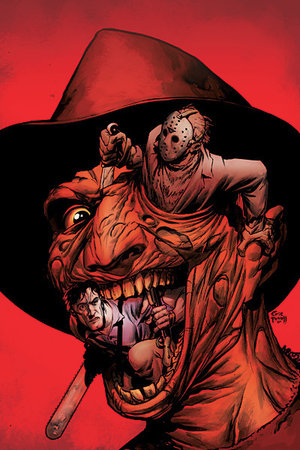 The Sequel in Another Medium miniseries Freddy vs. Jason vs. Ash and its sequel, The Nightmare Warriors, follow up on the events of Freddy vs. Jason and tosses Ashley J. Williams into the mix to create a horror crossover that fans could only have dreamed about before its publication. DC Comics, Dynamite Entertainment, and Wildstorm published both series from 2007 to 2009, with James Kuhoric (writer) and Jason Craig (illustrator) helming both series. Kuhoric based the original series on the original Freddy vs. Jason vs. Ash film treatment by Jeff Katz; Katz himself helped pen The Nightmare Warriors, which he and Kuhoric designed as a horror film parallel to DC’s various Crisis events, right down to combining the three franchises’ continuities and turning the Nightmare Warriors into a Justice League-style ‘superteam’.

After the events of Freddy vs. Jason, Freddy Krueger manipulates Jason Voorhees into retrieving the Necronomicon Ex-Mortis, which Freddy plans to use to revive himself and cause more carnage. Ash happens to have moved to Crystal Lake for the opening of a new Super Ultra Mega S-Mart, which serves as his cover while he keeps his own search for the Necronomicon alive. Once the triumvirate of terror meet, chaos ensues.

Following the events of the previous series, the United States government resurrects both Freddy and Jason in an attempt to exploit their supernatural powers. The government soon discovers that it can’t control the titans of terror, who now seek to take over the world using the Necronomicon. In the meantime, Ash stumbles upon the existence of the Nightmare Warriors, a support group for survivors of the two killers’ supernatural rampages. Once Ash and his new allies learn of the resurrection of Freddy and Jason, the Nightmare Warriors make it their mission to stop the deadly duo once and for all.