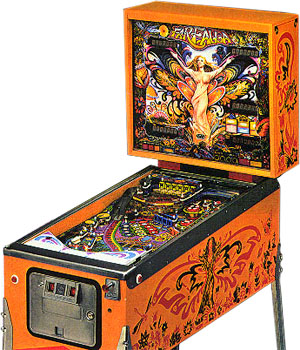 A pinball game for dads and daughters.
"Let's see what you can do."
Advertisement:

Farfalla is a Physical Pinball Table released in 1983 by Italian pinball maker Zaccaria.

In this game, players are challenged to find love (and a high score) in a colorful flower garden filled with butterflies. Knock down the orange, blue, and red butterfly drop targets to collect the corresponding colored flower specials, then lower the Ramp and shoot for the upper playfield for a chance at the yellow butterflies there. Find love to increase the bonus multiplier, test your reflexes with the React Feature to prevent draining the ball, then advance the colored flower specials to unleash the Multi Special — all while the butterfly nymph on the backbox smiles and watches...

Among enthusiasts, Farfalla is one of Zaccaria's most memorable games, both for its colorfully unconventional theme and its sexy, eye-catching backbox, illustrated by Lorenzo Rimondini. Instead of being painted on a flat sheet of glass, the fairy art was painted on molded semitranslucent plastic, giving it a three-dimensional look that attracted passersby. But even without the Fanservice, Farfalla is a respectable pinball table; underneath the tranquil theme is a shooter's challenge that tests the player's aim, ball-handling skills, and reflexes.

A digital version is available for Zaccaria Pinball.