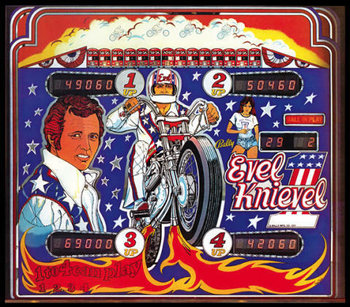 Evel Knievel is a 1977 Bally pinball machine based on the famous American motorcycle daredevil of The '70s. It was designed by Gary Gayton and illustrated by Paul Faris.

Evel Knievel was released when the pinball industry was transitioning from electro-mechanical games to solid state designs, and embodies aspects of both types. Go for the left drop targets to increase the Spinner values and enable the Extra Ball, or spell CYCLE to raise the value of the center bumper and try to score a Special. Daring players can try to spell SUPER for two free games, either by a long shot to the saucer at the top of the table, or risk a hit on the center target that can drain the ball in an instant. Most versions of this game were solid-state tables, though several hundred electro-mechanical versions were also made.

Pinball enthusiasts consider Evel Knievel a hallmark game of The '70s, a table that perfectly captures both the cultural and gaming atmosphere of the era. The game itself doesn't present any innovative new ideas, but simply offers enough shots and challenges to keep things interesting for all players. Gaming historians will note that Evel Knievel was the hottest Arcade Game of 1978, only to be knocked off its perch by a strange new thing called Space Invaders.

Bally released a home version of this pinball with a different layout, different artwork, and shorter legs to better accommodate children.