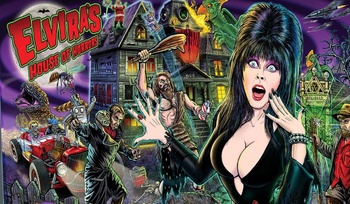 Elvira's House of Horrors is a 2019 pinball table by Stern Pinball. It was designed by Dennis Nordman, with software by Lyman F. Sheats Jr and artwork by Greg Freres. It acts as the third installment in an unofficial series of Elvira-themed tables, following Williams Electronics'note under their Bally label Elvira and the Party Monsters and Scared Stiff.

The premise is simple: Elvira is trying to sell the Haunted House featured in the title, but must get rid of the various characters from various public domain horror B-movies that inhabit it beforehand. The player must help her do so while also contending with the newly-risen Dead Heads and other creatures littering the premises. Along the way, they'll rise up the ranks on the B-Restorator, charge up the Freak Fryer, and find various pieces of Junk in the Trunk.

The game is notable as the very first pinball machine to have footage filmed specifically for its display – namely, Cassandra Peterson as Elvira giving an introduction and conclusion to each of the films featured in the game's primary modes. It also pulls footage from said films for use during play, as listed below. Other distinctive features include a physical model of the house itself on the playfield (with lights in the "windows" that can light up individually) and a Trunk that can act as both part of a ramp and a lock for multiball.

Elvira's House of Horrors initially came in three editions: Premium, Limited, and Signature. The 400 Limited Edition machines upgrade the game in various (largely cosmetic) ways, including adding a shaker motor and artwork on the cabinet's interior walls. Meanwhile, the 50 Signature Edition games have embossed cabinet decals and came with a handful of other goods: a swatch from Elvira's velvet couch and an autographed trading card. In 2021, Stern announced a new edition of the game

celebrating the 40th anniversary of Elvira's debut; it includes purple armor for the cabinet, modified artwork throughout the game, another autographed trading card, and a signed copy of Peterson's then-recent autobiography, Yours Cruelly, Elvira.