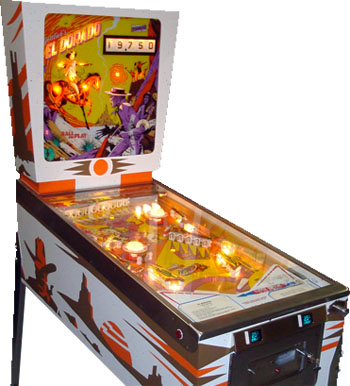 El Dorado is a single-player electro-mechanical pinball machine, designed by Ed Krynski with artwork by Gordon Morison. It was produced by Gottlieb and released in 1975.

The name refers to a mythical lost city of gold, with the backglass depicting a group of cowboys who've just found an (unseen) fortune. The game itself is deceptively simple; use the four flippers to knock down all fifteen drop targets, then hit the single lit target for a Special. However, hitting all the targets and rollovers requires skillful nudging and flipper control, and moving the lit spot and hitting it on the same ball is a challenge for most players.

Pinball connoisseurs consider El Dorado a classic Gottlieb "wedgehead" game, and it is frequently rated highly among all electro-mechanical tables. Gottlieb must have agreed, as the game was remade and re-released several times:

Not to be confused with an identically named digital pinball table from Zen Studios.

The El Dorado pinball and its variations demonstrate the following tropes: