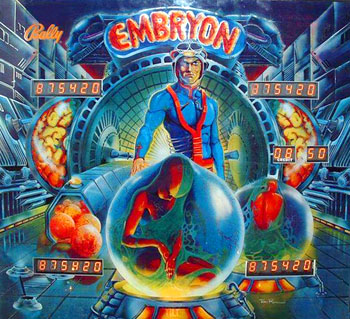 Embryon is a widebody arcade pinball machine by Claude Fernandez, with artwork by Tony Ramunni, and released in 1981 by Bally.

The game has the player in charge of some unspecified futuristic eugenics program, responsible for growing and birthing various multicolored humanoids in organic pods. Complete the top three-bank, pass through the 1-2 rollovers, then knock down the lower drop targets to expose the targets behind them. Hit the two captive balls in the middle of the playfield to spell EMBRYON, then capture a ball in the upper corner and start multiball. Complete the A-B inlanes and you'll be able to use the Flipsave to rescue balls before they drain down the right outlane.

Aside from being the last widebody pinball from Bally, Embryon is remembered for its vaguely unsettling yet alluring theme, which raises more questions than it answers. It has a small but vocal following of fans who enjoy its unorthodox layout and diverse targets; it's a rather fast game for a widebody pin, one that rewards patient players with good aim. The Machine Monotone voice, simplistic digital sound effects, and clinically alien artwork come together into a memorable Science Fiction package.