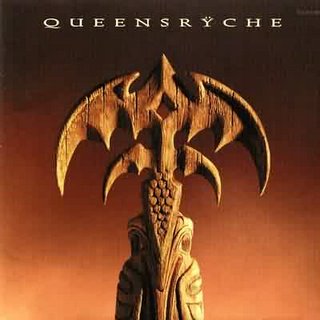 I AM I!
Advertisement:

A Progressive Metal band from Seattle, Washington, best remembered for their epic Rock Opera Operation: Mindcrime and its follow up, Empire, which contained the Top 10 hit "Silent Lucidity".

Starting out as something of an Iron Maiden-esque Euro-metal band, Queensrÿche has experimented with many different sounds and styles over the course of their career. For example, for their second album Rage for Order they utilized highly industrialized orchestrations, various production trickery and ominous synthesizers (dubbed "techno-metal"); and Hear in the Now Frontier featured a raw, stripped-back sound with little to no audio effects other than natural overdrive for the guitars. Albums such as The Warning, Mindcrime, Empire and Promised Land, meanwhile, featured comparatively straightforward Progressive Metal with multiple time signatures, complicated structures, twin guitar solos by Wilton and DeGarmo, plus the aforementioned experimentation with synthesizers and sound effects.

Like most hard rock bands from The '80s, Queensrÿche's popularity waned in The '90s with the rise of grunge (which, ironically, has its roots in Queensrÿche's hometown of Seattle). Nonetheless, Queensrÿche continues to record and tour, although founding member Chris DeGarmo left the band in 1998 to pursue personal interests. His place was filled by Kelly Gray on Q2K, Mike Stone on Tribe, Operation: Mindcrime II and Take Cover, Parker Lundgren on Dedicated to Chaos and Stone again, as of 2021.

In June 2012, Wilton, Rockenfield and Jackson kicked Geoff Tate out of the band. Todd La Torre of the band Crimson Glory was chosen as Tate's replacement, and the previously-hired Parker Lundgren was retained on rhythm guitar. Tate continued to tour under the Queensrÿche name with past Queensrÿche member Kelly Gray. On the 28th of April 2014, a statement was released that confirmed that Tate had lost the Queensrÿche brand to Wilton, Rockenfield and Jackson who will be carrying on as the sole version of the band while Tate was given the rights to perform Operation: Mindcrime and Operation: Mindcrime II in their entirety for unique performances. Tate renamed his band to Operation Mindcrime and continued recording separately through 2017.

Rockenfield left the band for a paternity leave in 2017 that turned into a permanent separation and another round of lawsuits, leaving Wilton and Jackson as the remaining founding members.