Music / Songs for the Deaf 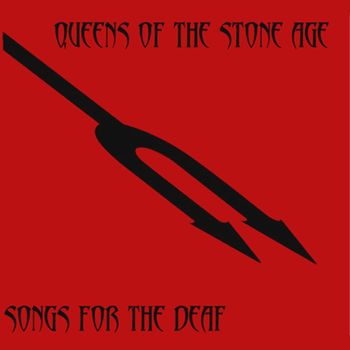 First it giveth, then it taketh away...
"Hey, alright, it's Kip Kasper. KLON Radio, LA's infinite repeat. How we feelin' out there? How's your drive time commute? I need a saga. What's the saga? It's Songs for the Deaf. You can't even hear it!"
—Blag Dahlia as fictional DJ Kip Kasper in the opening moments of the album
Advertisement:

Songs for the Deaf is the third studio album by Queens of the Stone Age. Released in 2002, it exhibits an impressive Genre Roulette, since the band successfully straddled their original stoner rock sound with more aggressive Hard Rock influences.

This is largely thanks to the fact that Dave Grohl contributed the drum work and even toured with the band, inspiring frontman Josh Homme to use a heavier sound during the production process. The result is a weird mix of psychedelic, garage, and doom rock, which garnered widespread positive reviews.

The album is also noted for its fake radio show excerpts between songs, which makes fun of pretentious radio station hosts and the shallowness of mainstream music. The record itself is a loose Concept Album, since the excerpts collectively take the listener on a drive from Los Angeles to the desert (specifically Joshua Tree).

Josh Homme claims that this was added to keep fluidity between the tracks, but his inclusion of stupid radio deejays throughout the album seems to speak to his disdain toward going mainstream and selling out early in his career. In any case, this has become Hilarious in Hindsight since the singles "No One Knows", "Go with the Flow", and "First It Giveth" did become hits.

The record has gone platinum and helped the Queens gain mainstream recognition.

Tropes for the Deaf: