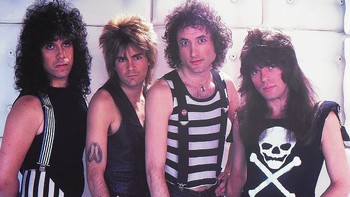 A Los Angeles-based rock band formed in 1975. They are generally credited with introducing Heavy Metal to American audiences with the album Metal Health in the early 1980s. Often classified as Hair Metal, their earlier albums in fact bear more resemblance to the blues-metal of AC/DC; later albums tend to sound like Aerosmith. It is notable for being the first band of Randy Rhoads, of Ozzy Osbourne fame.

Bang your head! These tropes will drive you mad!: