Music / The Radiators (US) 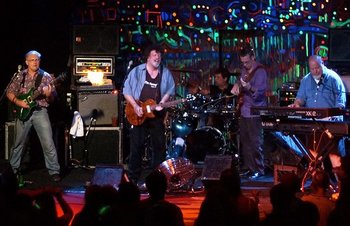 The Radiators (occasionally The New Orleans Radiators) are a long running rock band from New Orleans, purveyors of a spicy gumbo they call "Fishhead Music"—a blend of swamp rock and New Orleans-style R&B, with a dash of funk, a splash of soul, and a sprinkling of Creole and Cajun influences.

The band started when five working musicians got together for a jam session in singer/keyboardist Ed Volker's garage. The next day, all five quit their current bands and formed The Radiators, which would remain their main gig for the next thirty-three years. Volker, a prolific songwriter, wrote the vast majority of their repertoire, and shared singing duties with guitarist Dave Malone. The band's dual-guitar attack, also featuring guitarist Camille Baudoin, invited frequent comparisons with The Allman Brothers, with whom they later developed a friendship.note  The Radiators were invited to play at the wedding

They quickly attracted the attention of more established New Orleans musicians like Dr John, Professor Longhair, and particularly with Earl King, with whom they toured for several years. Within just a few years, they had enough of a cult following to became regular headliners at the famous New Orleans Jazz Festival (which, as you might guess, was hardly limited to jazz). Soon thereafter, they achieved some mainstream success after signing with Epic Records. Their first song to make the charts was "Doctor, Doctor" from Law of the Fish, and their biggest seller was the song "Confidential" from Zig-zaggin' Through Ghostland, which made it all the way up to #8 on Billboard's Mainstream Rock chart.

In the meantime, their following developed in some odd directions. The band's association with the eccentric Mardi Gras Krewe

, the Mystic Orphans and Misfits (MOMs), and their annual performances at the wild, invite-only MOMs Ball, led to their fans forming their own "krewes" in various cities, such as the Krewe of DADs in Minnesota, the Monkey Krewe in Florida, and the Krewe de Playa in Los Angeles, and hosting similar events. Like the MOMs Ball, these events were often given individual names, such as "Void Where Not Prohibited" (1984 MOMs Ball) or "Night of the Living DADs" (2007 DADs Halloween show). The band would often write songs to match the names, making them one of the only bands ever to have title tracks for concerts! Most of these songs were throwaways, played only once, but a few, like "Fuck'em If They Can't Take a Joke" from the 2003 MOMs Ball, became part of the band's regular repertoire.

Speaking of their repertoire, it was legendarily huge. They had over 300 original songs, mostly written by the extremely prolific Volker, and over the years, they ended up covering over 1000 more songs by a wide variety of artists. Though much of it never ended up on official recordings, the band had an open taping policy, like The Grateful Dead, and over a thousand free concert recordings are available from The Internet Archive

The band officially broke up in 2011, when Volker decided he was tired of the road, but they have had annual reunion concerts in New Orleans every year since then.

That's the Trope of the Fish: