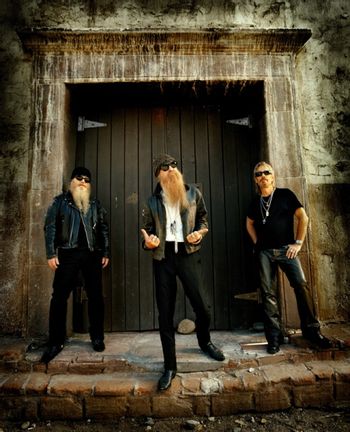 The little old band from Texas that could, ZZ Top is a long-running Blues Rock band from Houston with the classic lineup of guitarist/vocalist Billy Gibbons, bassist/keyboardist/vocalist Dusty Hill and drummer Frank Beard (who, ironically, has the shortest beard) lasting over fifty years. Formed in 1969, they were the longest-running rock band with the same line-up (with Golden Earring and then Rush close behind them) until Hill's death in 2021.

People most likely know them for three things. One of them would be their actual music, which is made up of Epic Riff-driven, frequently humorous Blues Rock tunes in The '70s, Epic Riff-driven frequently humorous Blues Rock tunes with synths and electronics in The '80s, and a compromise between the two since The '90s. The other two would be their distinctive appearance - sunglasses plus chest-length beards (except for Beard, who just has a moustache and sometimes a very close cropped beard) - and their videos in The '80s, which always involved hot chicks and Cool Cars, most notably the Eliminator

Bass player Dusty Hill passed away on July 28, 2021; in accordance with Hill's wishes, the band will continue

with their longtime guitar technician Elwood Francis in Hill's place.

ZZ Top is the Trope Namer for: