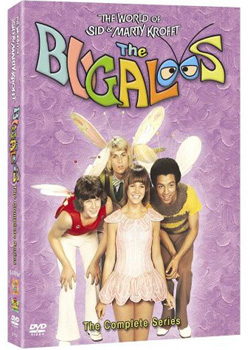 The Bugaloos was a TV show created by Sid and Marty Krofft Productions. It was about four anthropomorphic British insects: Joy, I.Q., Courage and Harmony, who sang and played instruments. They also flew since they had wings. The Bugaloos were pestered by a rock witch named Benita Bizarre and her flunkies Woofer, Tweeter and Funky Rat, a Nazi rat. The show aired from September 12, 1970, to September 2, 1972, for one season of 17 episodes.

I.Q. was a grasshopper who played guitar, Joy was a butterfly who sang and played the tambourine, Harmony was a bumblebee who played the keyboard and Courage was a ladybug who played the drums. Five thousand kids tried out for this series. Phil Collins and John Reed were two of the three finalists for I.Q. Unfortunately, the role went to John McIndoe, a musician who worked at Apple Records. The four lucky winners were John McIndoe, John Philpott, Caroline Ellis and Wayne Laryea. They flew to Los Angeles, where the show was taped.