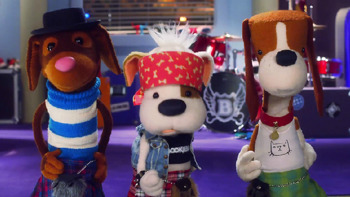 Left to right: Paws, Bookaboo, Growler.
"… A story a day, or I just can't play."
—Bookaboo's Catchphrase
Produced and created by Lucy Goodman (ITV, 2009), Bookaboo is a British children’s series about the drummer for an Australian classic-rock-inspired act made up entirely of sentient orphaned dogs. One hang-up — he’s basically a Man Child who gets cold feet unless he reads at least one picture book per day.

A Canadian version was produced for the CBC and sister station SRC in 2013. Another version was launched initially exclusively for Amazon Prime in 2016, with these episodes airing on the CBC a few months later.