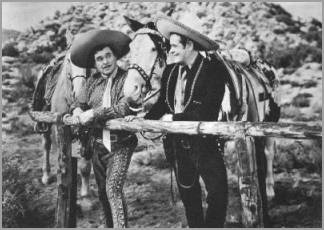 Cisco, let's win this, before we are dancing at the end of a rope, without music.
"Here's Adventure!"
"Here's Romance!"
"Here's O. Henry's famous Robin Hood of the old west, The Cisco Kid!"
Advertisement:

The Cisco Kid was a half-hour American Western that ran from 1950 to 1956. Starring Duncan Renaldo and Leo Carrillo, it was loosely based on the character of the same name in O. Henry's 1907 short story, "The Caballero's Way”.

Adapted from the films of the 1910s, 1920s, 1930s and 1940s and the '40s radio show of the same name, the TV series continued the adventures of Cisco and his partner Pancho. In the series, both Cisco and Pancho are technically desperadoes who are wanted for a number of unspecified crimes and wander the backcountry of Northern Mexico and the old American Southwest to elude the law. However, they are viewed by townsfolk and honest, upstanding peace officers alike as modern-day Robin Hoods because of their willingness to assist the oppressed and downtrodden when political figures and the law either shows itself to be too crooked or refuses to help out. In the end, Cisco and Pancho always catch the bad guy, Always Save the Girl and always save the day.

It was also nominated in 1953 for an Emmy in children's programming.

By the time the show ended in 1956, it was rated by Billboard magazine as the most popular filmed television series for children in the United States. As well as becoming an influence in pop culture for generations of children and adults.

The Cisco Kid provides examples of: