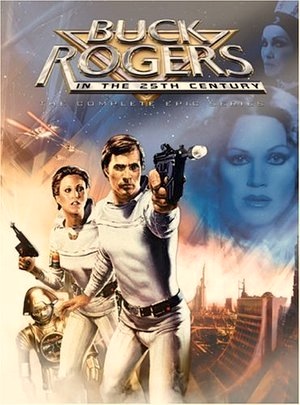 Does this remind you of anything?
"In the year 1987, NASA launched the last of America's deep space probes. Aboard this compact starship, a lone astronaut, Captain William "Buck" Rogers, was to experience cosmic forces beyond all comprehension. In a freak mishap, his life support systems were frozen by temperatures beyond imagination. Ranger 3 was blown out of its planned trajectory into an orbit one thousand times more vast, an orbit which was to return Buck Rogers to Earth, 500 years later."
— Second season's Opening Narration
Advertisement:

Buck Rogers in the 25th Century is an American science-fiction series that ran from 1979 to 1981. The feature-length pilot movie was released theatrically several months before the series itself aired, inspired by the success of Star Wars two years earlier. The film and series were based upon the Buck Rogers character created by Philip Francis Nowlan that had been featured in comic strips and novellas since the 1920s, and on the CBS and Mutual radio networks, airing several times each week from 1932 to 1947.

The series starred Gil Gerard as Captain William "Buck" Rogers, a US Air Force pilot who commands Ranger 3, a spaceship resembling the Shuttle that is launched in May 1987. Because of a freak combination of gases, he is frozen in space for 504 years and is revived in the 25th century. There, he learns that the Earth was united following a devastating nuclear war that began on November 22, 1987, and is now under the protection of the Earth Defense Forces, headquartered in New Chicago. The latest threat to Earth comes from the spaceborne armies of the planet Draconia, who are planning an invasion. Aiding him are Col. Wilma Deering (Erin Gray), a Starfighter pilot, and Dr. Elias Huer, head of Earth Defense Forces, and a former star pilot himself.

Buck Rogers in the 25th Century provides examples of: