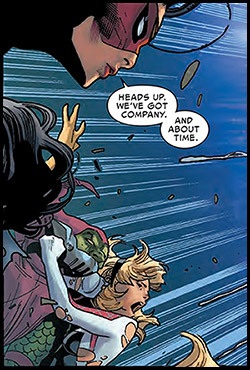 A prime contender for the single most-used phrase in action scenes across the board. Traditionally prevalent in movies/TV, as it looks even dumber written down than it does spoken; however, video games have embraced the phrase with aplomb.

The phrase refers to the arrival on the scene of parties antagonistic to the speaker. While probably originally spoken mainly by protagonists, the phrase can now be equally expected to be heard by villains when the hero shows up on the scene. Originally, this trope would have been a wry indicator of the speaker's aloof nature: while the phrase would be suited to friendly gatherings, describing the arrival of a cadre of heavily-armed miscreants in the tone of a gadabout planning the evening's socializing is a good way to come off as unflappable and suave.

Or it would have been, if it had not become hijacked as the default thing that all people must say whenever anyone shows up with a mind to give them some trouble.

Variations include "we have company" and occasionally even "company's coming"; however not only is the key device of referring to one's antagonists as "company" widespread, it's overwhelmingly conveyed in this exact phrasing.

"Vijay, we have company!"
"No problem, this is a company car."

"Vijay, we have company!"
"No problem, this is a company car."