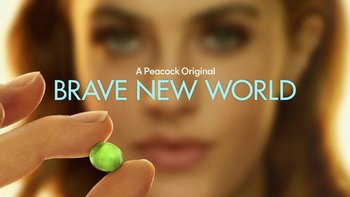 Everybody in their Place. Everybody Happy Now.
"This is New London. Everybody's happy here, everybody has a purpose, there's no hunger or violence...You just need to embrace this place and let it be wonderful."
-Bernard Marx
Advertisement:

Based on the ground-breaking novel by Aldous Huxley

(which was also adapted into a TV movie in 1980 [in the UK] and 1998 [in America]), Brave New World is an original series made for on NBC's streaming service Peacock, launched on July 15, 2020. The cast includes Jessica Brown Findlay as Lenina Crowne, Harry Lloyd as Bernard Marx, Alden Ehrenreich as John the Savage, Hannah John-Kamen as Wilhelmina "Helm" Watson, and Demi Moore as Linda.

Welcome to New London. A world without hunger, disease, or sadness. A world where everyone has a place in society and anything that doesn't fit is simply left out. But beneath this veneer of happiness and peace lies a darker side, a world of a strict caste system, free will suppressed, and where the happiness everyone experiences comes in the form of a pill.

The series focuses on the story of John, or as society calls him, "John the Savage". Growing up in the outside world, John's life changes forever when he is brought into the bright and clean New London. Quickly though things take a turn as John's views and sense of morality come to clash with that of his new home. As he digs deeper into the secrets of the city, John will soon learn there are forces at work that will do anything to keep their "perfect world" from collapsing...

This series shows examples of...

This is your home now.