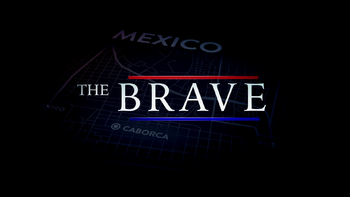 "The defense of the United States and its citizens relies increasingly on two groups. The intelligence analysts in Washington, who uncover and interpret threats. And the Special Forces operators tasked with eliminating them."
— Opening introduction to the episode "Pilot".
Advertisement:

The Brave is a NBC drama show that aired its first episode on September 25, 2017. It stars Anne Heche, Mike Vogel, Demetrius Grosse, Natacha Karam, Noah Mills, Hadi Tabbal, Sofia Pernas and Tate Ellington. In May 2018, NBC announced that the show would not be scheduled to air another season.

The show centers on missions conducted by the Defense Intelligence Agency, an external intelligence agency that's in charge of providing defense and military intelligence to the American government. At home, daily operations are overseen by Deputy Director Patricia Campbell, who recently lost her son in the War on Terror. Out in the field, Captain Adam Dalton commands a DIA SOG team that is tasked by Campbell to conduct black operations all over the world.