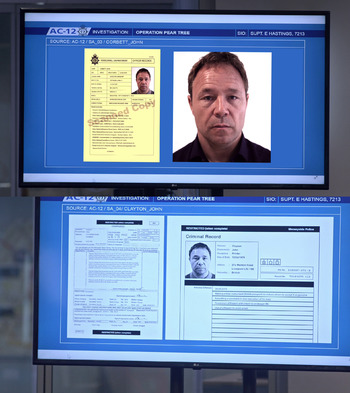 A cop going undercover.note John Corbett's profiles before and after going in as a criminal.
Sonny: I feel like these Mexican uniforms are like the skinny jeans of military apparel.
Ray: Yeah, well, I'm pretty sure our hosts don't want us flashing Old Glory across the city, right?
— SEAL Team

There may be a time when the hero or the villain needs to do something covertly to the point that if they were seen, their identities can be given away due to publicly known or identifiable police (or law enforcement agencies), military or paramilitary uniforms, insignias, logos, name or ID tags. That's certainly going to be troublesome if someone was able to detect them and "inform" the relevant personalities. If that's done, their efforts are doomed to fail no matter what they do.

So what can be done? One way is to temporarily dispose/hide anything that can be identified by the public by hiding their uniforms, insignias, logos and IDs until it's safe to use them again. Sometimes, they also accompany the use of balaclavas and face masks. Others include the use of technology such as hacking or creating false identities in order to hide their actual names and affiliations from the public eye. Dressing as the Enemy is also another way of temporarily hiding your face and identity until the time is right. Another is to simply change clothes before the operation is performed until it's over. Or you can just insist that you're not a cop/soldier/law enforcer/etc. and hopefully the said organization is considered as a No Such Agency.

One of the few negative ideas about it is that it can sometimes lead to a Friend or Foe scenario. Others bad scenarios include catching your allies unaware of who you are or miscommunication when the persons or groups involved are not identified correctly by friendlies. Sometimes, the undercover cop/agent/soldier/etc. can be forced into a situation where they need to do something horrible to prove that they're really a criminal/terrorist. The worse thing that can happen is that someone you know is a Dirty Cop, a Bad Cop/Incompetent Cop, The Mole or a Rogue Agent who reveals said person's affiliation to the bad guy/s.

Partially Truth in Television since a False Flag Operation always requires a group to hide anything that can easily identify them if an operation is conducted. Anyone doing an legitimate undercover op needs to pull this off successfully so that they can't be easily unmasked and maintain Plausible Deniability as much as possible.

Compare/contrast to Secret Identity, which entails to hiding your identity fully from the public. Compare to The Mole, which is one reason why the people involved would hide their true allegiance alongside The Infiltration, which is another reason why people would go to great length to hide their allegiance as a mole. Secret Identity Identity can sometimes result in the person/persons trying to do their work during a secret op, but they fear Becoming the Mask one day.

This sometimes goes along with On-Site Procurement to ensure that an operation that requires great secrecy at all costs remains a secret.

See Outside Man Insideman, which is a character dynamic trait that goes along with this. A subtrope of this is Must State If You're a Cop and Dirty Harriet.

Any Rogue Agent will probably want to do this to keep attention away from them if they're acting as the bad guy, which in this place with be a subversion of said trope.