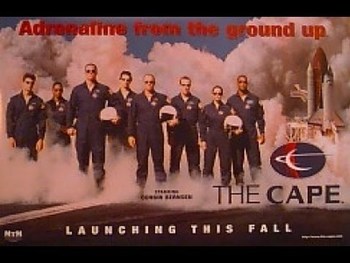 This series deals with the day-to-day life in NASA in The Nineties. Since the abbreviation stands not just for the Space Administration, but for Aeronautics as well, you can expect lots of gratuitous shots of space shuttles, satellites, but some jets as well. And lots and lots of training sequences.

It was cancelled after the first series.

Has nothing to do with the dress of the superhero nor with the vigilante show.

The show was made with the contribution of Buzz Aldrin who served as a technical advisor.