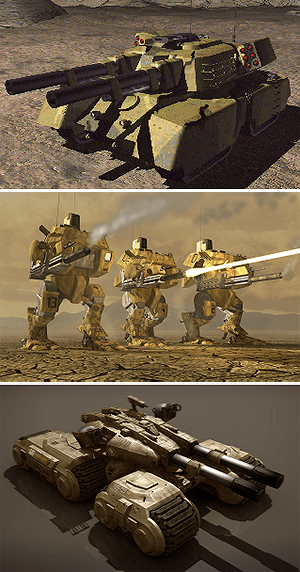 As the technology used to wage warfare has advanced, all new weapons and tactics have risen to use them. In the process, previous methods become far less prominent, and often eventually disappear altogether. Most modern navies have all but abandoned battleships, and the only blades today's soldiers carry are knives.

But in the future... what if technology takes a sudden and (un?)expected turn? The advent of military-grade lasers and fire-control systems that are decidedly not Point Defenseless makes missiles useless and taking aircraft into battle suicidal. All those modern aircraft carriers and missile cruisers suddenly become obsolete, and the battleship is king of the seas once more. What if personal-scale Deflector Shields make swords and spears viable weapons again?

This occurs a lot in Speculative Fiction, where some discovery or advance in science or technology has the net effect of rendering the last 20 to 200 years of military tactical development moot, forcing a return to the methods of an earlier time of warfare, often still with high-tech spins on the old gear. For example, if large close-combat weapons become viable again, they may develop Laser Blades, Hot Blades, or Vibroweapons. This overlaps with Retro Upgrade.

Often invoked by creators who wish to justify Hollywood Tactics or other kinds of martial Rule of Cool; the justifications may or may not be convincing, depending on how much thought went into them. See also Break Out the Museum Piece, when this happens in a more immediate sense. Compare Archaic Weapon for an Advanced Age, which does not require this trope, but will frequently overlap with it when it does occur.