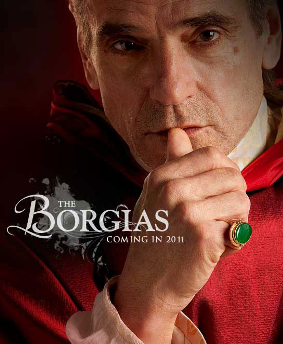 It's good to be the Pope.
"Now we are in the power of a wolf, and if we do not flee, he will inevitably devour us."
— Giovanni de' Medici
Advertisement:

The Borgias is a television series that ran on Showtime for three seasons.

Having had such a big success with The Tudors, Showtime has continued the theme of sexy period drama by turning to another turbulent period of history, and another notorious family. Stage left; enter the Borgias.

The Borgias, or at least this particular branch of the family, have become a byword for corruption and decadence. It doesn't help that the head of the family, Rodrigo, is often believed to have bought, murdered, and blackmailed his way into the papacy. Or that he had a string of mistresses well into his sixties, despite the fact that he was, you know, a cardinal and then Pope. Or that he installed at least one of those mistresses in the Vatican itself. Or that he also had at least four acknowledged children, again despite the cardinal and Pope schtick. Or that one of his sons, Cesare, was a Magnificent Bastard in every sense of the word. Or that his daughter, Lucrezia, has something of a reputation as a poisoner and a femme fatale. Or that one of her husbands accused her of committing incest with her father and brother. Or that Cesare is rumored to have killed his brother, Giovanni, and either murdered or ordered the murder of his sister's second husband. Or that...

Well, you get the picture. Let's not even start on 'The Banquet of the Chestnuts'. To be fair, the Borgias had many enemies and faced much more scrutiny than was typical of the time due to xenophobia (Rodrigo being a Spaniard who moved to Italy to advance his career) and much that was written about them was quite possibly exaggerated, expanded upon, or possibly even made up, to demonize the family. Not that this means that they were particularly nice people; they weren't, even by the standards of the time. Considering the world they lived in - Rome in the 15th century had corruption up to the ears - they couldn't afford to be.

In other words, sex, plots, betrayal, hypocrisy, the Catholic Church, exaggeration and fabrication of historical facts—the perfect recipe for a TV show!

All this is portrayed in the series and then some. Jeremy Irons has top billing as Pope Alexander VI, and the series debuted in April 2011. It has garnered some of the highest ratings on Showtime, and was renewed for a second, and then a third season. Shortly before the end of the third season, Showtime announced they were cancelling the series. Plans for a TV movie to wrap up the series were shelved due to the expense of the project, with the proposed script being released as an e-book instead.

Not to be confused with a 1981 series, also called The Borgias, which was produced by The BBC. That version was one in a series of failures by the BBC to create "the new I, Claudius".

Not to be confused either with Borgia, the European 2011 version produced by Canal+ and created by Tom Fontana from Oz.