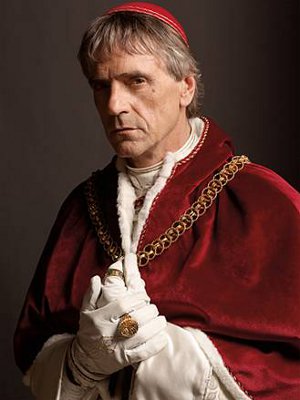 "The vultures are circling our family, our Rome. We most protect ourself."
Played By: Jeremy Irons

A scheming, ambitious cardinal who, after the death of Pope Innocent, uses all the power at his disposal—including bribery, extortion, murder, and his children—to become the new Pope. Despite his willingness to use his family as pawns, he does care for them a great deal. 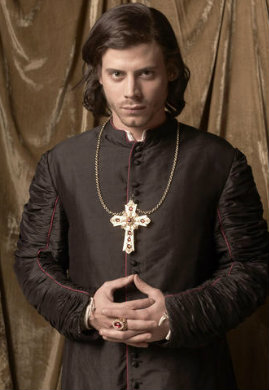 "Only God forgives. We are Borgias, and we do not forgive."
Played By: Francois Arnaud

The oldest son of Rodrigo and Vannozza, and older brother of Juan, Lucrezia, and Gioffre. Cesare is as ambitious as his father, but while Rodrigo works through the church, Cesare wants political power. While he resents his father for refusing to allow him to leave the clergy, he is also Rodrigo's strongest ally. 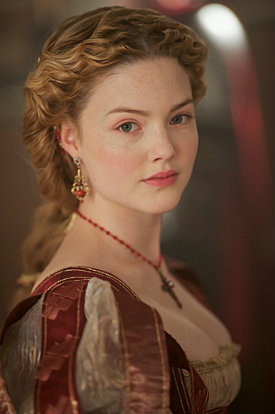 "I will not be beaten."
Played By: Holliday Grainger

The naive, yet intelligent daughter of Rodrigo and Vannozza. She loves her family, particularly her brother Cesare. She is married to Giovanni Sforza, but falls in love with the stable boy, Paolo. 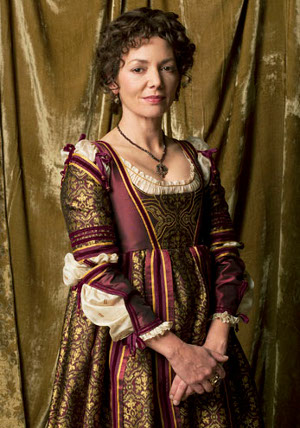 "Don't you want them to hear that you have a new whore?"
Played By: Joanne Whalley

Rodrigo's former long-time mistress and mother to his children, actually married to a commoner named Theo. She is quite displeased when Rodrigo casts her aside and takes up with Giulia. 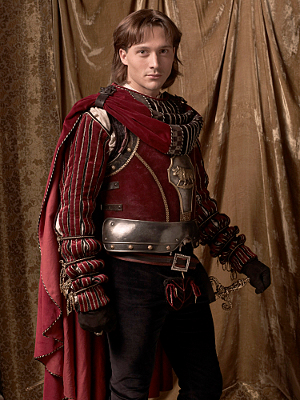 "I am the gonfaloniere of the Papal Army, brother! Go back to the College of Cardinals."
Played By: David Oakes

The second Borgia brother, chosen by his father to follow the path of a soldier, a role envied by his older brother Cesare. He is sadistic, spoiled, jealous, and extremely quick-tempered. His inadequacies are obvious to everyone except Rodrigo.

The youngest of the Borgia children and the only one still behaving like a child. Aside from having an Arranged Marriage, his political value is negligible.

Allies of the Borgias 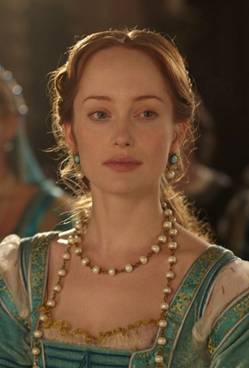 "Beauty can be deadly when well used."
Played By: Lotte Verbeek

A renowned Roman beauty who becomes Rodrigo's mistress and Lucrezia's mentor, having separated herself from her husband. We later learn she is quite skilled at diplomacy and finances. 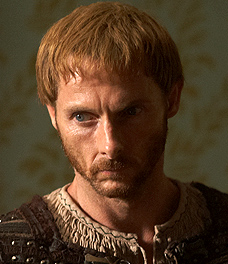 An extremely skilled and apparently emotionless assassin who is recruited by Cesare after failing to poison him and his father. Becomes The Dragon to Cesare. 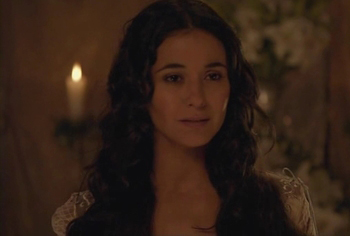 The duchessa of Squillace, illegitimate daughter of the king of Naples, and the wife of Joffre Borgia. She carries on an affair with her husband's older brother, Juan. 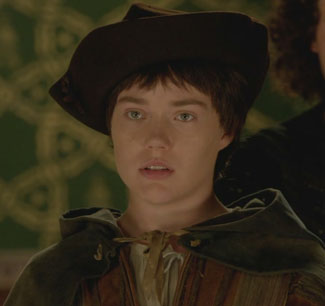 A youthful apprentice artisan whose cleverness and talent draws Rodrigo's attention, and is shortly thereafter promoted to master. In reality a young woman disguised as a boy because women, of course, can't become artisans. Rodrigo is taken with her, probably because he knows she is very capable of discretion. 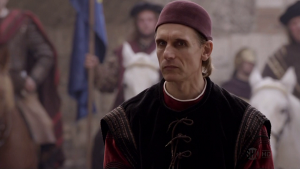 "We let those French barbarians march through our principality and do nothing? Cardinal, that is a different kind of nothing. That will cost you something."
Played By: Julian Bleach

Lucrezia's young, innocent suitor. He appears somewhat naive in the world of Italian politics thus far, and is instantly taken with Lucrezia though he at first has no idea that it's her. He soon becomes betrothed to Lucrezia, and will, according to history, be her second husband.

Bianca is introduced in season 2 as a mistress of Rodrigo Borgia's. He later discovers that she has married Francesco Gonzaga, an ally of Rodrigo's.

Charlotte d'Albret is introduced in season 3 as Cesare's wife and a key to his political alliance with France. Depending on how closely the show follows history, we may not see her much, as the historical Charlotte married Cesare, got pregnant by him, and never saw him again.

The successor of King Charles of France, but unlike his predecessor, an ally to the Borgias who seeks to have annulment for his marriage. 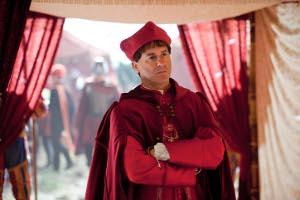 Part-time Dragon to Rodrigo, in the first two seasons, Ascanio's loyalties seem to lie with his family and the church in general. Things look to be changing in season three. 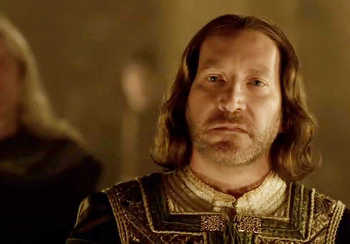 "Good, then we need hardly see each other except when marital duties call. Then I will keep them brief and businesslike."
Played By: Ronan Vibert

A noble from a formidable Roman family, married to Lucrezia for the benefit of political connections. 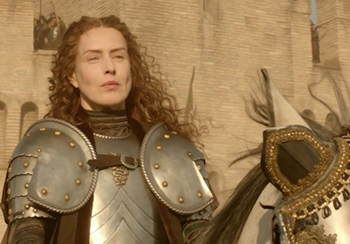 "I will never, NEVER bend my knee to the whoremaster of Rome!"
Played By: Gina McKee

Cousin of Giovanni, Lodovico, and Ascanio; she emerges as a force to be reckoned with.

Cousin of Caterina, Ascanio, and Giovanni, Ludovico is the Duke of Milan.

The son of Caterina Sforza who accompanies her mother during some of her dealings with the Borgias in order to learn how to become a leader.

An assassin in the employ of the Sforza family.

Enemies of the Borgias 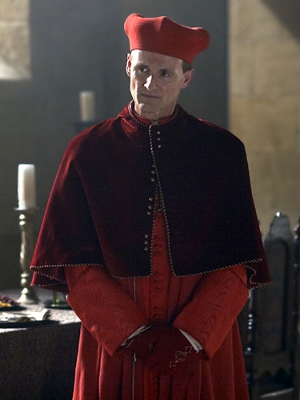 "Sometimes goodness is in need of a little badness."
Played By: Colm Feore

Rodrigo's most persistent opponent among the college of cardinals, and the man who will eventually become Pope Julius II.

The arrogant, warmongering King of France. He believes Naples is his by birthright, and the Borgias are standing in his way.

A cardinal during the first three seasons of the show.

Burchard is an expert in canon law who is brought in frequently throughout season one to interpret canon law in the Vatican and keep records of all the happenings.

An Ottoman prince who stays with the Borgia family as a hostage so his brother no longer has to worry about him taking his throne. He develops close relationships with the family, but his brother pays Rodrigo to murder him.

A young stable boy in the employ of Giovanni Sforza. Falls in love with Lucrezia and is the father of her child. Killed by Juan when his affair with Lucrezia is discovered.

A beautiful woman who caught Cesare's eye at Lucrezia's wedding, she was married to an abusive husband. Cesare takes care of that, but it drives Ursula to a convent. Even though she is a nun, she cannot escape Cesare's influence. 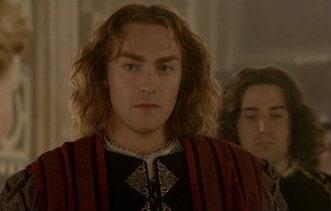 A season two recurring character who is the brother of Lucrezia's suitor, Calvino di Pallivinci. Though Calvino is the older brother and therefore the better catch, Lucrezia is more attracted to Raffaello. 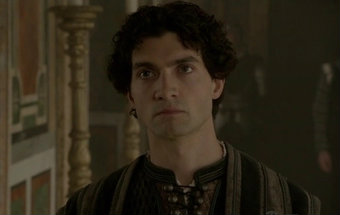 A season two recurring character who is Lucrezia's suitor and the brother of Raffaello. Though Lucrezia accepts his proposal, he withdraws his off when he finds out she slept with his brother.

One of the men in line for the throne of Naples, but with no desire for power or ambition of his own, despite being kind.