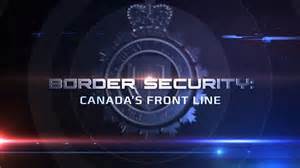 Thousands of men and women dedicate their lives to protecting Canada's border crossings.
Every passenger has a 'story'...it's our job to dig deeper for the truth.
- Lori Miller, Border Services Officer.
Advertisement:

Border Security: Canada's Front Line is a Canadian Spin-Off of an Australian production of the same name by Force Four Entertainment.

Phony tourists here to work, belligerent visitors smuggling contraband, toys packed with heroin, weapons disguised as cell phones: all are just another day at the office for the Canada Border Services Agency.

Every day, twenty thousand passengers request entry into Canada by way of Vancouver International Airport (YVR), and many more at land crossings in the Lower Mainland of BC. While most experience the usual uneasiness that comes with passing through immigration and customs, others have more legitimate reasons to feel nervous.

Cameras shadow Canada Border Services Agency (CBSA) officers as they interrogate suspicious passengers who may or may not be hiding something. Passengers react in a variety of unpredictable ways - they lie, argue, play the victim, plead ignorance and even threaten legal action. But they are no match for the investigative tactics of the CBSA officers. After all, the law is on their side.

And unfortunately for the passengers being questioned, so is technology. Throughout the episode, officers question, cross-examine, inspect, pat down, swab, search and x-ray suspects and their belongings, chipping away at the holes in their stories. For viewers, it’s a wild, unpredictable ride as each passenger’s secret is finally revealed.

CBSA withdrew its participation in 2014 following privacy concerns relating to an arrest made in 2013, and the series (in Canada) was officially cancelled in 2016