Film / History of the World Part I 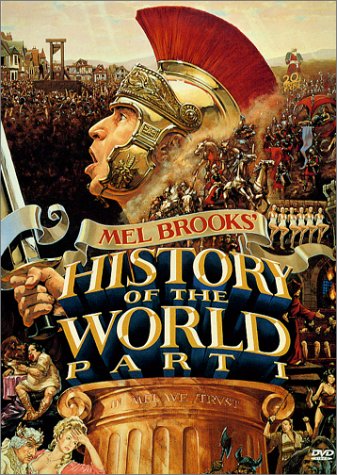 "It's good to be the king!"
Advertisement:

History of the World Part I is a 1981 sketch comedy film written, directed produced by and starring Mel Brooks.

Starting out with the Dawn of Man, cavemen discovering fire, cave paintings, and the art critic, the film skips to various 'important' areas of history usually with a unique interpretation of the events. Following this, the film touches on Moses receiving the Fifteen... er, Ten Commandments then takes time to waltz through the Roman Empire and end up at the Last Supper. They then sing and dance during The Spanish Inquisition, though nobody expects it. The French Revolution comes next with Brooks playing King Louis XVI and the piss boy (Don't Ask) that turns into the Prince and the Pauper though it ends well through a miracle. Before the credits are 'Coming Attractions' for History of the World Part II. The entertaining, history-based nature of this film makes it an example of The Abridged History.

Fun Fact: The melody for the song "Jews In Space," which closed out the film, was later recycled for another Mel Brooks film, Robin Hood: Men in Tights, while the concept itself evolved into Spaceballs, with its Druish Princess.

On October 18, 2021, forty years after the first part, an actual History of the World Part II was officially announced

in the form of an eight-episode variety series produced for Hulu. Brooks is set to return as executive producer and writer, joined by Nick Kroll, Wanda Sykes, and Ike Barinholtz, with production starting in Spring 2022.

Not to be confused with history of the entire world, i guess.

Simple rule: if Moses raises his arms--no matter the reasons--some water is getting parted.

Simple rule: if Moses raises his arms--no matter the reasons--some water is getting parted.