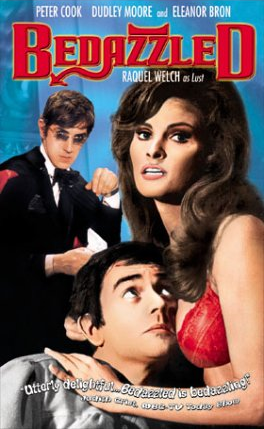 Can you guess which of the seven deadly sins she is?
Advertisement:

Bedazzled is a 1967 Comic Fantasy film directed by Stanley Donen and written by and starring Peter Cook and Dudley Moore.

Moore plays Stanley Moon, a short-order cook at Wimpy's who is hopelessly in love with waitress Margaret (Eleanor Bron) but too shy to tell her how he feels. Depressed over his lot in life, he attempts to hang himself. When his attempt fails, in steps Satan, who goes by the unlikely name of George Spiggott and is played by Peter Cook. George offers Stanley seven wishes in return for his soul, and in his desperation, Stanley sees no reason to refuse... after all, What Could Possibly Go Wrong??

This 1967 film contains examples of: