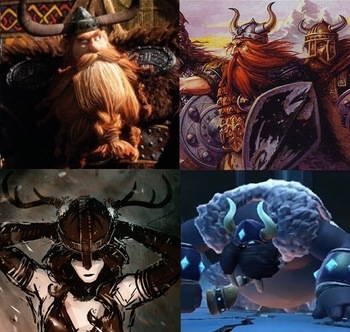 Clockwise: Stoick the Vast in How to Train Your Dragon 2, Balduvian Barbarians in Magic: The Gathering, Lord Fredrik from Donkey Kong Country: Tropical Freeze and Aydis from Heathen.
Advertisement:

The horned helmet is one of the most instantly recognizable traits of fantasy barbarians: whether a simple metal skull-cap fitted with cows' horns, elaborate metal headgear with towering, wrought protrusions or just the skull of a horned creature worn as a hat, this serves as a clear and recognizable identifier that the people sporting such helms probably aren't streaming out of the depths of the forests for some quiet tea and biscuits.

The horned helmet stereotype was started by the Romans, who attributed such helmets indiscriminately to the barbarian peoples to their north. This was later reinforced by some archeologists digging up a Viking helmet near a couple of drinking horns and assuming that they had once been one piece. This led to horned helmets becoming an archetypal accoutrement of Celtic, Germanic or generally pseudo-European barbarians in later times.

Visually, besides calling back to the forest-dwelling tribal groups of ancient history, horned helmets also serve to provide a fearsome, bestial look to their wearer, enlarging their silhouette and making them seem particularly monstrous and inhuman, displaying their status as a barbarous figure. Consequently, heroic barbarians tend to wear helmets with smaller and less intimidating horns, while villainous figures will be found sporting ones with larger and more menacing projections. In-universe, these helmets may be worn as a deliberate invocation of the above themes, so as to intimidate and cow their wearer's foes. Alternatively, the horns may be trophies of successful hunts or simply cultural affectations.

In cases where the barbarians in question are of a particularly monstrous bent, such as them belonging to an entirely non-human species, they may sport organic horns as part of their natural appearance without the need of helmets. Sometimes this will happen as part of a gag where they will seem to wear helmets at first and take them off to reveal that their horns are actually part of their body. See also Our Minotaurs Are Different, as minotaurs are often portrayed as very barbaric or bestial beings.

In reality, horns on a helmet would actually sabotage its effectiveness, providing a joint to catch incoming blows rather than deflect them. As such, while horned helmets were sometimes created in real life, these were strictly ceremonial and decorative pieces and not usually meant for being used in battle. Horned helmets may be replaced by the (equally unhistorical) winged helmets.

The horns on his head are made of croissants. Points for him not being a Viking this time, since Rolland mentioned that he has Gaulish ancestry and, unlike the Vikings, the Gauls actually did allegedly have horned helmets sometimes.

The horns on his head are made of croissants. Points for him not being a Viking this time, since Rolland mentioned that he has Gaulish ancestry and, unlike the Vikings, the Gauls actually did allegedly have horned helmets sometimes.