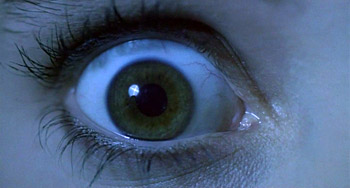 The theme song ends, or The Teaser starts, or we return from a commercial break, or we simply change scenes. What do we see but a close-up of a character's eye?

This is an Eye Open, a device sometimes used to show that a character is waking up. Of course, sometimes it's just used to show off an actor's good-looking eyes.

Not to be confused with Eye Awaken, which is when a character's eyes suddenly open, but the shot doesn't open with an image of them. See also One-Eyed Shot and Open the Iris.