Eye on a Stalk 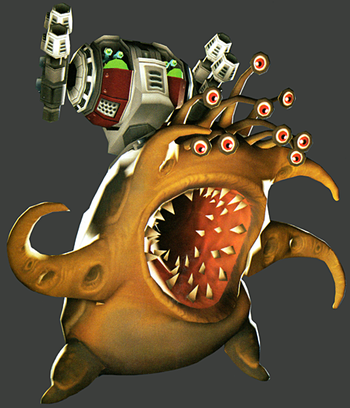 All those eyes must surely give her a greater perspective on galactic affairs.note  The little guys riding the turrets on her back also count.
Advertisement:

When designing a creature of some sort, a very good way to make them look weird is to mount their eyes (or eye) atop a pair of stalks.

As many other Eye Tropes have proven, messing with the eyes in any way is a sure-fire way to attract a few cocked eyebrows. Eyestalks tend to be very long and tentacle-like, and given the association between tentacles and Eldritch Abominations, it's no surprise that sticking some eyes on top of them would have that effect. It certainly helps that eyestalks in Real Life are associated with such 'icky' creatures as Slugs and Crabs. If a monster or a character has eyestalks and isn't antagonistic in some way, odds are they're Creepy Good, or at least quirky. Of course, some may just consider them Ugly Cute.

Is a Sub-Trope of Eyes Do Not Belong There, as the weirdness factor comes from putting eyes in a place people aren't used to seeing them. May often overlap with Cyclops or Extra Eyes. Contrast with Oculothorax, in which the eye is so deep within the creature that it makes up the near-entirety of their body (though these are not mutually exclusive). See also Sensory Tentacles.