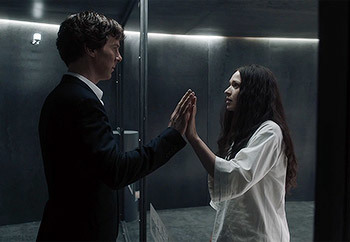 Mind the glass...note Oh, wait, there isn't any.'''
"Today we have to be soldiers, Mycroft. Soldiers."
— John Watson
Advertisement:

Sherlock and Watson, who had been shot with a tranquilizer by Eurus, trick Mycroft into acknowledging her existence. Eurus steps up her attacks on Sherlock, culminating in the bombing of his Baker Street apartment. Sherlock, Watson and Mycroft venture forth to Sherrinford, a maximum-security psychiatric facility where Eurus is housed. Although Mycroft is skeptical at the suggestion that she has escaped, the trio discover that Eurus has compromised the staff and controls the entire Sherrinford asylum. She subjects the trio to a series of ordeals, testing their morals by forcing them to choose which of her victims live and die and ultimately forcing Sherlock to confront the memory of "Redbeard", a childhood friend whose death set in motion events that saw Eurus incarcerated. Realising that she will continue to test him until someone he cares for dies, Sherlock tries to connect with her on an emotional level, offering her the love and relationship with a brother that she never had, and Eurus stands down. Sherlock and Watson return to the Baker Street apartment, where they find another message from Mary imploring them to stay together. A time lapse montage shows them rebuilding the Baker Street flat to its original lived-in form before meeting a series of unusual clients.