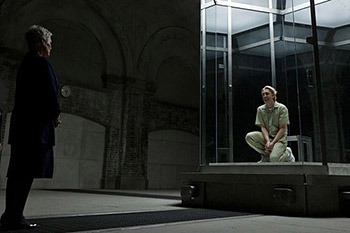 So a character has been busted, caught, kidnapped, jailed ... whatever. They now have to be contained somewhere, and what better choice than a transparent cell with zero privacy?

Being imprisoned in such a manner, functionally on exhibit for the captors, may be a demeaning moment, or an opportunity to show how self-assured the character is. Possibly a result of the character falling victim to The Collector. A Poisonous Captive might take advantage of the transparency to communicate with their captors. Overlaps with Human Popsicle if the character is rendered immobile. That said, having one or more walls be see-through does have practical advantages for a jailer - if the guards can casually look into the room at any time, then it becomes a lot harder for the prisoner to do things like make shivs, attempt to saw through the window bars or dig an escape tunnel without getting caught.

This trope comes into action when a character is deliberately placed within a transparent cage to hold them. This transparent material can be glass, another material, or Some Kind of Force Field. If only one wall is transparent, then it's a Force-Field Door or a material version thereof. Often comes with a side-order of Nobody Poops. Compare Cardboard Prison and Crystal Prison.