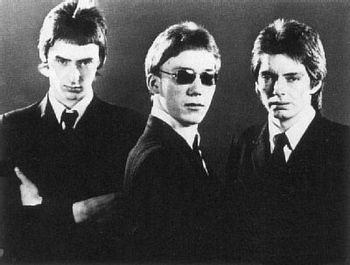 Some people might say my life is in a rut,
But I'm quite happy with what I've got.
People might say that I should strive for more,
But I'm so happy I can't see the point.
"Going Underground"
Advertisement:

The Jam were a British Punk Rock band from The '70s and early Eighties who spearheaded the "mod revival" movement.

Throughout its career (except for a short period in the beginning), its lineup was as follows:

While sharing the sociopolitical outrage and fast tempos of their contemporaries such as the Sex Pistols and The Clash, The Jam distinguished themselves by their love for The '60s mod scene - whereas other punksters wore ripped clothes and played amateurishly, The Jam wore neatly tailored suits in imitation of The Who and drew on a wide variety of influences such as Soul and R&B, The Who, Power Pop, Psychedelic Rock, Pop Punk, Post-Punk and New Wave. Their songs were distinguished by their accessible, poppy hooks and Weller's highly-acclaimed lyrics, whose sociopolitical criticism and distinct "Englishness" drew comparisons to Ray Davies. They became one of the most popular bands of the late-70's and early 80's in Britain.

After the band broke up, Paul Weller formed The Style Council, pursuing his interests in stuff like Soul and Jazz music, among other genres, before embarking on a long and fruitful solo career.

In 2007, Foxton and Buckler re-united as "From The Jam", with Russell Hastings and David Moore, playing Jam songs. Foxton also played with Weller on the latter's 2010 album "Wake Up The Nation". However, Paul Weller has ruled out a full re-union in the strongest possible terms.

Not to be confused with either the Justified Ancients of MuMu or JAM Project.