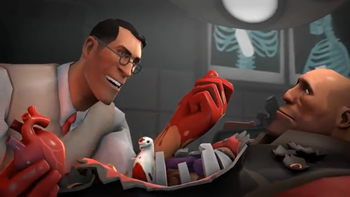 Surgeries are dangerous and delicate things. There's a reason why "brain surgeon" is a byword for "genius" - they have to spend hours carefully maneuvering minute instruments and a millimeter's error can kill their patient or worse.

Naturally, expect this aspect of medicine to be thrown away in the name of comedy: the nurse will give the surgeon a hammer and he'll immediately proceed to whack away violently, then an axe and proceed to hack away, then a drill, then a chainsaw, then an eggbeater, then...

If anaesthesia is administered, it's either by a sledgehammer to the head or copious amounts of booze. For an extra gag, the booze may turn out to be for the surgeon.

Don't expect to see what's going on with the patient during the operation, or an explanation as to why piercing his head is going to help with his Hiccup Hijinks, but he'll likely step away from the operation room completely healthy and his medical problem will be gone (or at least, he won't be horribly mutilated). However, agonised screaming and blood splattering across the screen are par for the course.

More rarely, this can also be Played for Drama. The trope might be justified if the surgery takes place before the 20th century, for instance, or under field conditions, or both (see Real Life). Whatever the reason, it's never pretty— pray they'll go for a Discretion Shot.

Common culprits for the comedy version are the Morally Ambiguous Doctor, Mad Doctor, or Depraved Dentist, while the dramatic version will more likely involve The Medic or the Frontier Doctor. A Back-Alley Doctor might be used for either. This trope might be one of the reasons for a Doctor's Disgraceful Demotion.