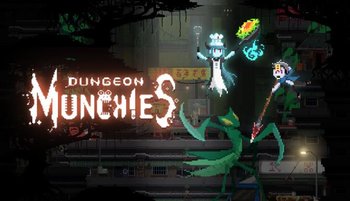 Kill. Cook. Eat. Repeat.
Dungeon Munchies is a side-scrolling RPG developed and published by maJAja. It was released in Steam Early Access on June 5, 2019, with a full release on July 27, 2022.
Advertisement:

You are a regular office worker in the big city—until you find yourself rising up from your coffin at your own funeral. Disoriented and confused, you leave and find yourself in a giant, mysterious, monster-filled underground complex, and encounter a ghost named Simmer, and her "workforce" of skeletons. She explains she brought you back from your grave for a very important mission:

Hunt down magical monsters, make delicious meals with their body parts, and help her spread word of and sell her series of cookbooks!

Thus, you descend, upgrading your equipment, devouring your creations and gaining new mutations, with the odd bit of forced surgery.