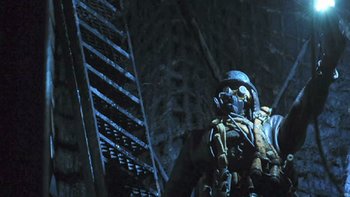 The final form of MAD GOD isn't the film itself, but the memory after you watch it. It's bringing you to that moment just after waking up from a dream, frozen, exploring fragments of your feral mind before they fade back into the shadows. That's the moment. MAD GOD is just a way to get you there.
-Phil Tippett

is an ongoing series of Surreal Horror videos created by Phil Tippett, a Stop Motion animator who has worked on Jurassic Park, The Empire Strikes Back, and RoboCop. It tells the story(?) of a mysterious gas-masked, coated figure, called The Assassin in the paratext, traveling through a nightmarish underworld.

Tippett began design and concept work on Mad God back in 1990, but for budgetary reasons, it didn't get off the ground until 2010, with a successful Kickstarter campaign. The first episode went online in 2013, and since then, two more episodes have been made, with a fourth one underway. Each episode can be downloaded from the website at a small fee. It's worth it. It is now being made into a feature length film using the first 3 episodes and 60% new footage.