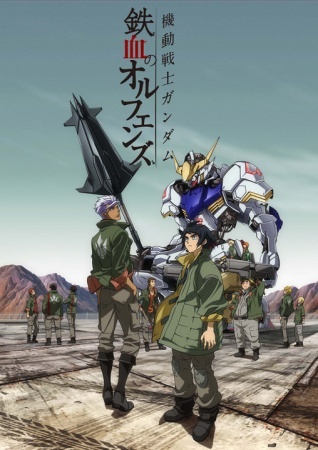 ♪ Raise your FLAAAG!! ♪
"The sustenance of life is on the battlefield..."
Advertisement:

It is the year Post Disaster 323, that is, over three hundred years after the Calamity War which brought destructive change to Earth's government. Mars has long been colonized, but suffers under crippling poverty, and now some of its colonies are seeking independence.

The Martian city of Chryse is a hotbed of the independence movement, spearheaded by Kudelia Aina Bernstein — the young daughter of an upper-class family. Earth has hired Private Military Contractor Chryse Guard Security (CGS) to enforce Earth's rule of the Chryse region. CGS's Third Group — made up entirely of Child Soldiers, orphans taken off the streets and children of extremely poor families — is given a special assignment: escort Kudelia to Earth to begin informal talks between the Earth government and the Martian independence movement. However, before they can even leave for Earth, CGS is attacked by Gjallarhorn, an elite military unit from Earth. The adults of CGS's first group order the Third Group to Hold the Line against the attack... while the First Group flee to safety, leaving the Third Group behind as Cannon Fodder.

The leader of the Third Group, Orga Itsuka, is not prepared to take this lying down. He orders Mikazuki Augus, his most loyal supporter and the Third Group's Ace Pilot, to enter the fray with the ASW-G-08 Gundam Barbatos — an ancient mobile suit from the Calamity War era, used by the CGS to provide power to their base. Armed with this ancient machine, Mikazuki fends off Gjallarhorn and saves the Third Group. The First Group's casual sacrifice of the Third Group is the last straw in a long line of abuse, and Orga begins taking steps to ensure that the Third Group won't have to suffer such treatment again...

Mobile Suit Gundam: Iron-Blooded Orphans is the 2015 installment in the long-running Gundam franchise, as part of the Fall 2015 lineup. A second season was confirmed after the end of episode 25, which began airing on October 2nd, 2016. The 2nd Season picks up two years after the events of the first, focusing on the flourishing Tekkadan group, now seen as great heroes for their triumphs against Gjallarhorn. Meanwhile Kudelia continues her fight for Martian independance, with McGillis continuing his schemes within Gjallarhorn to seize power and wipe out its corruption.

The Japanese dub can be streamed for free at Gundam.info

, while the English dub can be viewed on FunimationNow

if you have a subscription. Hulu has both the Japanese and English dubs.

open/close all folders
A-B
Contrast this with Gundam Seed, Destiny or 00, where you have even cruiser class ships routinely destroying each other with large beam cannons that don't even get named until episode 5+.
C-F
G-L
M-O
P-R
S-U
V-Z
"Tekkadan. The iron flower that never wilts."
Feedback

Killed in the toilet

That's a lousy way to go out.

Example of:
Camping a Crapper

Killed in the toilet

That's a lousy way to go out.