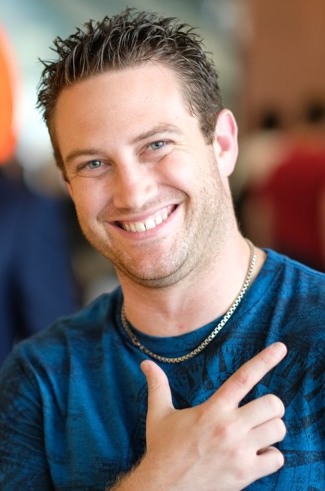 Need someone to voice an energetic young boy, a comic relief, or a Nice Guy? Hire this guy!
Advertisement:

Bryce Austin Papenbrook (born February 24, 1986) is an American voice actor born in Los Angeles, California. He is best known for voicing young heroes such as Eren Yeager in Attack on Titan, Masaomi Kida in Durarara!! and Kirito in Sword Art Online. Even before he broke out into voice acting, he was California royalty, being the son of the late Bob Papenbrook, who famously played various characters in the Power Rangers franchise until 2002, and Debbie Rothstein.

Just like his father before him, he also serves as a a kickboxing instructor who had received many black belts and trained over 16 years under (you guessed it) the Chuck Norris version of Tang Soo Do.

Bryce Papenbrook and his works provide examples of:

This article is...!
Awesome!
Detailed!
Amazing!
...aaaand unable to coordinate.
It's just as important as I am. Which is to say, not very.