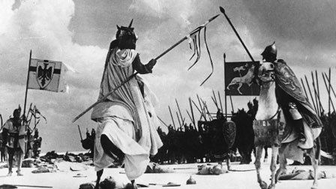 It may be efficient now, but you know you've got a problem when the champion's champions start picking champions.
"You know, Dick, if I had my way, I'd meet Rommel face to face; him in his tank and me in mine. We'd meet out there somewhere... salute each other, maybe drink a toast, then we'd button up and do battle. The winner would decide the outcome of the entire war."
— General George S. Patton, Patton
Advertisement:

There's a dispute, and you could have your armies go at each other and kill a lot of people and cause a lot of damage — but really, wouldn't it just be simpler all around if two soldiers fought? (Or two small, numerically identical groups?)

Obviously, if the other side is evil, you consent only if Even Evil Has Standards, because you must trust their word, and it's not unknown for a battle to break out anyway, but sometimes it works. Let's Fight Like Gentlemen is often expected. And, of course, This Is Something He's Got to Do Himself.

May be an Involuntary Battle to the Death between Worthy Opponents.

If the champion says Give Me a Sword, he is sure to get one.

Also known as single combat, but covers only those fights where the two people fighting are deliberately selected from many. If it's only single combat because potential allies can't take part, see Locked Out of the Fight instead. Contrast Leave Him to Me!.

Compare Duels Decide Everything, Trial by Combat, Worthy Opponent. Could be part of the rules of Challenging the Chief. May result in a Decapitated Army if the fight is to the death.

For a realistic example of political tension manifesting in competitive sports, see International Showdown by Proxy.

Achilles and Boagrius fight over control over Thessaly. It doesn't take long.

Achilles and Boagrius fight over control over Thessaly. It doesn't take long.