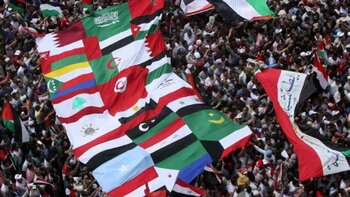 In December of 2010, a young merchant immolates himself to death in protest of the thuggish policies of the Tunisian dictatorship. This soon leads to protests and, eventually, the dictator's resignation and exile...and the beginnings of a revolutionary wave not seen since the end of the Cold War.

Unlike the revolutionary wave at the end of the Cold War, though, none of the revolutions ultimately established democracy. note Tunisia, where it all began, looked promising for a while, but the seizure of almost absolute power by President Kais Saied in 2022 brought those hopes to an end. Indeed, a phenomena coined as the "Arab Winter" followed, with the resurgence of authoritarianism and sectarianism instead of democracy and liberalism, especially in areas that delved into civil war. However, social changes are taking root across the Arab World as people begin to question, and some regimes have made changes to prevent damage; comparisons to Europe's Revolutions of 1848 have begun to appear in the literature.

Note that this page concerns a series of (not necessarily revolutionary) major crises that happened in the Arab world since 2011. Strictly speaking, the Arab Spring ended in February 2012, when Ali Abdullah Saleh, the-then dictator of Yemen, fell from power. The fallout that happened, including repression, sectarianism, violence, and war that frequently made headlines, fell into either the aforementioned Arab Winter or were unrelated events. With the resurgence of revolutionary wave that toppled the dictators of Algeria and Sudan, as well as protests in other places, some political analysts have begun referring to a "second wave" of the Arab Spring since 2019, although the negative stigma that has since been associated with the term means that it is not universally accepted.

open/close all folders
Advertisement:
The State of the Countries, as of Writing
The following lists the countries majorly impacted by the protests. Except for Iraq, every country in this list was led by a dictatorship before the Arab Spring happened. Technically, every country in the Arab world experienced the Spring one way or another, however, most were placated or put down before it could grow. And because If It Bleeds, It Leads, only countries that experienced a regime change (or an attempt, but it must be bloody) are cited by the media as examples:

The Arab Spring in fiction: