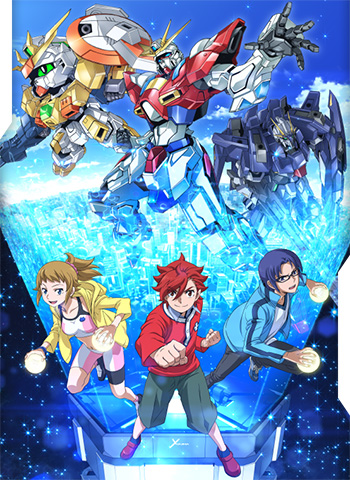 In the near future, new technology was invented that allows people to animate and control plastic models in sporting competitions known as "Gunpla Battles." Seven years after Sei Iori and Reiji Asuna won the 7th Gunpla Battle World Tournament, new rules and new battle modes have made the sport more popular than ever.

Gunpla Battler Fumina Hoshino hopes to one day make it into the All-Japan Gunpla Battle Championships using her custom Gunpla, the "Powered GM Cardigan''. Unfortunately, these Championships are 3 vs 3 team matches, and Fumina is the only member of her Gunpla club. Fumina's luck turns around, however, when she meets yet another mysterious red-haired boy, Sekai Kamiki, whose martial arts training makes him a natural at Gunpla piloting. With the addition of a model builder at her school named Yuuma Kousaka, Fumina at last has her team, and together the three set off to realize their various dreams To Be a Master.

As with season 1, Try is notable for its insane levels of Mythology Gags, with character cameos and customized versions of mobile suits from previous Gundam series appearing everywhere, to the point it has its own myth gag page.

Please set your Troper Base!