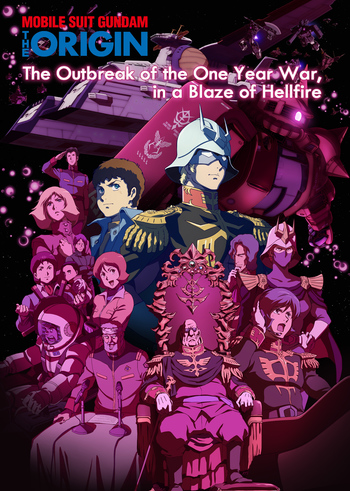 Hey, was it good to be born into this world?
The Earth Sphere had begun a headlong race into chaos and darkness...
Advertisement:

The series is the third of its kind and follows many of its plot elements while expanding on those elements and adding unique elements of its own. The plot is the same as the original series and is as follows:

The series follows Ordinary High-School Student Amuro Ray, opening in the midst of a stalemate in the war between the Earth Federation and the Principality of Zeon. Though the Earth Federation has (or, rather, had) superior numbers and resources, the Zeon military has annihilated much of the Federation's population with chemical weapons, decimated their fleet with their new mobile suit technology, nearly ended the war in a stroke with a Colony Drop, and follow up by invading Earth.

While fighting a losing battle on Earth, the Federation stepped up its R&D program to develop its own mobile suits, resulting in the Super Prototype "Gundam". While doing final tests on the Gundam in a remote space colony, they are attacked by a small Zeon force led by Char Aznable. Amuro ends up Falling into the Cockpit in order to save the colony, and from there is pulled into the war between the Earth Federation and the Principality of Zeon. But, of course, things aren't as simple as they appear to be...

The manga itself was adapted into a series for theatrical release. It is a prequel covering the manga's flashbacks to Char and Sayla's childhood and the rise of Zeon. It premiered in March 2015. As part of a deal between Sunrise and Right Stuf, it was given an American release by the latter with an English dub recorded by NYAV Post

In addition, it spawned at least three spin-off side stories set both before and after the main storyline:

In the United States, the manga was previously available from Viz, who released part of it in twelve collections in the American comic book format, following the Japanese tankobon editions (small size, few color pages, and printed on newsprint). Unfortunately, these editions cost double the standard price for about half the content and are now out-of-print. More fortunately, Vertical Inc have picked it up and released the entire series, retranslated, in a Limited Edition hardback format based on the Japanese aizoban editions (which are over-sized, have more color pages and are printed on high-quality gloss paper). All twelve volumes have been released, with the three side stories included in the final volume.

Now includes its own character page.