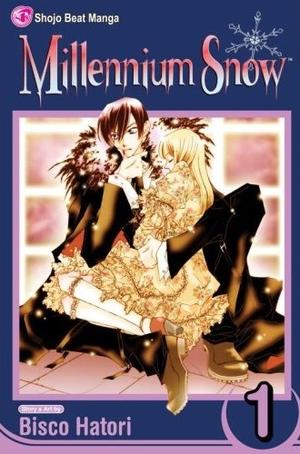 Millennium Snow (also known as Sennen no Yuki and A Thousand Years of Snow) is a manga originally published in Japan from November 2001 to August 5, 2002 in LaLa. Created by Bisco Hatori before her great success with Ouran High School Host Club, it was an Orphaned Series for a long time before being revived in January 2013 and concluding in December of that year.

Seventeen-year-old Ill Girl Chiyuki was born with a heart condition and has spent most of her life in and out of the hospital. The doctors do not expect her to survive long enough to see the next snow. One night, through her hospital window, she sees a boy (Tōya) jump off the roof. Running outside, she discovers that he is unhurt; he has simply collapsed due to low energy from lack of food. When Yamimaru, his bat companion, shows up with a lunchbox, Chiyuki figures out that the mysterious boy is actually a vampire.

Despite a rocky beginning, Chiyuki and Tōya begin to develop a friendship. When Chiyuki's heart threatens to give out, Tōya gives her some of his blood to heal her. This cure is so effective that she not only survives but is able to return to school. With Yamimaru's help, Chiyuki persuades Tōya to enroll at her school as well. She also draws the attention of Satsuki, a handsome flirt who is actually a werewolf. The three have fun and adventures together, but hanging over it all is the threat that Chiyuki's condition will one day return....