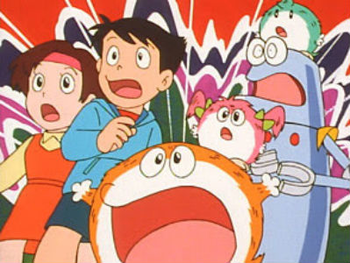 Mojacko is a 74-episode anime series based on an original Manga series created by Fujiko F. Fujio. Directed by Tetsuya Endo, the anime was broadcast on TV Tokyo between October 3, 1995 and March 31, 1997.

The story of Mojacko revolves around Amano Sorao, his childhood friend Miki, and various misadventures with their alien friend Mojacko and his Robot Butler Donmo. Later, Mojacko's younger siblings Mojari and Mojaru join the gang, with Mojacko's Worthy Opponent Momonja adding to the hijinks as the story goes further.

Helping Mojacko return home, treasure hunts and various other adventures await them in this rather whimsical series.

Oddly, while Mojacko came before Doraemon, Doraemon had an anime series and several movies even before Mojacko's first animated episode.

This anime/manga contains the following tropes: