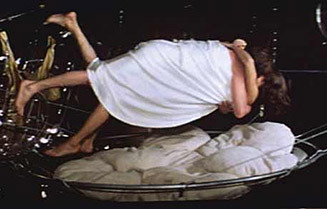 Space. The final frontier. And a completely new environment for indulging in humanity's favorite pastime: sex!

Many writers have turned their imagination to the subject of what sex would be like in zero gravity. The general consensus seems to be that it would be like a Two-Person Pool Party without the water (examples involving more than two people are hard to come by, as no one enjoys dealing with the three-body problem).

Unfortunately very hard to pull off, due to the lack of gravity having weird effects on the body, including (ahem) blood pressure. Zero-G is more accurately called "free-fall" because one is literally falling. Zero-G sex is sex while perpetually falling. The microgravity environment would also mean that the couple would be a slave to Newtonian physics, meaning that any... vigorous movement is going to cause both to careen wildly around their spaceship, resulting in multiple possible injuries.

exact plans were unclear, although they did claim to be "in talks" with launch companies before the funding campaign failed. There was one married couple that did fly together on STS-47:

N. Jan Davis and Mark C. Lee, who had met and then married secretly during training, and told NASA so soon before the flight that there wasn't time to send a replacement. However, if they attempted this trope—which is itself highly doubtful—they aren't talking about it, and neither is anyone else. The closest anyone's actually come was a twenty second shot for a porn film that was done by the same means of simulating microgravity as the infamous "Vomit Comet" plane ride: fly to 11,000 feet and engage in a brief, steep dive. (No word on what this actually cost the production company.)

And no, this title has nothing to do with a woman lacking a G-spot, or the lack of evidence of G-spots.
See also Love Floats and Flight of Romance.

"Take Me Around the World"

At the end of "Moonraker", Bond and Holly Goodhead "attempt re-entry", only to be called by Mi6. When James figures its time to go back home, Holly asks to be taken around the world again first.

"Take Me Around the World"

At the end of "Moonraker", Bond and Holly Goodhead "attempt re-entry", only to be called by Mi6. When James figures its time to go back home, Holly asks to be taken around the world again first.