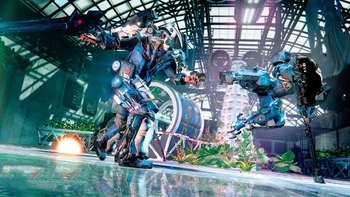 Safety is our priority.
We are human, so we fight. But are we fighting for our future, or theirs?
Advertisement:

The Science Fiction Souls-like RPG that you've all been waiting for.

The Surge is a 2017 video game developed by Deck13 and published by Focus Home Interactive.

In the twilight years of humanity's decadent and obsolete civilization, corporations rule over a dying world. Most of Earth's work force comes from intelligent androids and dexterous machines, and millions of unemployed risk permanent brain damage to get the necessary implants that can link them to a work-oriented exosuit, just to keep up with a work force that is stronger, faster, smarter, and most importantly, do not make mistakes. Usually.

Warren is one of the few lucky unemployed who just got a job, at a major corporation no less; CREO, the world-advertised conglomerate promising to repair Earth's ecosystem with some kind of space-based satellite technology. Confined to a wheelchair, the company's biggest draw for him is an Exo-Suit Rig - a framework of Power Armor that will let him walk again. Other than that, he knows that his new 6-to-6 construction job is nothing but a tax write-off, and what little he accomplishes will be overshadowed by thousands of drones, hundreds of new experimental robots, and dozens of high-tech security forces who are so advanced one literally cannot damage them by whacking their legs with cattle prods as they shoot down insurgents and malfunctioning droids with missiles and railguns.

But it appears something has Gone Horribly Wrong. His first clue? Despite the Auto-Doc's claims, it grafts his brand-spanking new exoskeleton onto his skeleton without anaesthetic. He passes out while it's drilling into the back of his skull...

...and wakes up in a junkyard with one of the aforementioned autonomous drones dragging him off for disposal. The only humans he meets for some time are fellow Rig-jockeys who respond to his attempts to strike up a conversation by attempting to strike off his head with an industrial power tool.

Somehow, he was one of even more lucky survivors who managed to wake up still sane. Half the facility is in ruins, all the humans have gone nuts, and they along with all the robots are trying to kill him, and ONLY him. Even worse, there are things in the facility that surpass any technological advancements CREO has made - as far as he knows - as if they came from centuries in the far-future. What did all of this? Does it extend to the rest of the world? Has he been asleep for centuries, and if so, how is he still alive?

The key gameplay mechanic is that pretty much every single opponent he meets is a Boss in Mook Clothing capable of killing him in single combat unless he pays absolute attention. Any attempt to mindlessly hack and slash through a fight will leave him very dead in short order. Dodging and blocking are not optional; he may be wearing half a ton of armor like it's a T-shirt and swinging an industrial power tool like it's a foam rubber bat, but so are every single one of his enemies. And at the same time, he always has to keep an eye out for the opportunity to rip off someone's arms, legs or head if not make them Half the Man He Used to Be, as the only way to upgrade his own Rig is by tearing new components right off their bodies before their Rigs self-destruct.

Several DLC packs have been released, including the CREO Special Employee Kit pack and the Fire and Ice pack, which add implants and special elemental weapons to the game. A major DLC, A Walk in the Park, was released in December 2017, involving exploring CREO World, a massive amusement park for CREO employees and families and visitors. Like everywhere else in the complex, CREO World has suffered in the wake of the catastrophic incident, with rampaging robots, crazed maintenance workers, ruined attractions, and a sinister machine intelligence behind everything.

The Surge contains examples of: