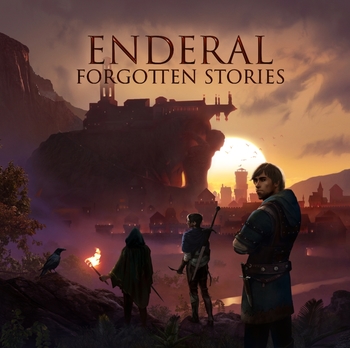 I led them to the light. I, alone...
— Unknown
Advertisement:

Enderal: The Shards of Order

is a total conversion mod for The Elder Scrolls V: Skyrim made by the German team SureAI (also responsible for the Nehrim total conversion for Oblivion). It was released officially in 2016 and re-released on Steam in 2019.

Set in an all-new universe unconnected with Tamriel or Nirn, in comparison to Skyrim, Enderal features a completely new world to explore, overhauled gameplay mechanics, and a new skill system. Much like its predecessor Nehrim, there is no level scaling or randomly generated loot/enemy lists in dungeons. Skills are not raised by using them, but by spending "learning points" and reading corresponding skill books, giving it a much more CRPG feel than Skyrim.

The story and the world is significantly darker, grittier and — not least — bleaker in its tone than Skyrim, skewing heavily towards gloomy European Dark Fantasy with plenty of Gothic Horror undertones (and even a fair bit of Cosmic Horror), featuring a dark, psychological storyline, and focusing on the impact the conflicts have on the people of the land of Enderal.

The mod takes place on Enderal, one of the continents of the world Vyn. Set two years after the events of Nehrim, Enderal tells the story of an outsider who arrives at the titular continent in search for a second chance in life amid all the chaos and wars plaguing most of Vyn, but is soon dragged into working for the Holy Order, a religious organization that rules Enderal, to help prevent The End of the World as We Know It. Thanks to their strange ability to see glimpses of the past, this Prophet/Prophetess may just hold the fate of Vyn in their hands.

Originally downloadable just from the developer's site, the game and the expansion Forgotten Stories is now available on Steam, for free, however it requires a legal copy of Skyrim to play. In 2021, Enderal was made compatible with the Skyrim Special Edition.

The game's main writer, Nicolas Lietzau, has since taken to expand the universe of Vyn further through a Web Serial Novel titled Every Day Like the Last, which he eventually plans to collect into a trilogy of novels called The Enderal Trilogy. The first installment of the trilogy, Dreams of the Dying, was released in December 2020.