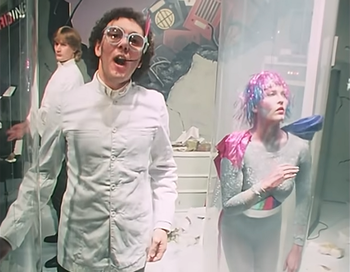 "Video Killed the Radio Star" is a 1979 song by Trevor Horn, Geoff Downes and Bruce Woolley, first performed by Woolley in 1979 for his debut album English Garden before Horn and Downes recorded their own version as The Buggles, becoming the debut single for the latter's 1980 debut album The Age of Plastic. Though both versions saw single releases parallel to one another in 1979, the Buggles' rendition was also released with a promotional music video that was shot in a day on a budget of $50,000.

While reaching the top ten chart positions in many Anglosphere and European countries, the song barely scraped a Top 40 position in the United States when it was first released. But then on August 1, 1981, at 12:01 AM EST, MTV hit the airwaves for the first time, and aptly, the music video was the very first to play after the promotional bumper. It had since been used as a milestone, like when MTV played its millionth music video on February 27, 2000, or when MTV Classic opened in Ireland and the UK on March 2010.

Tropes came and broke my heart: