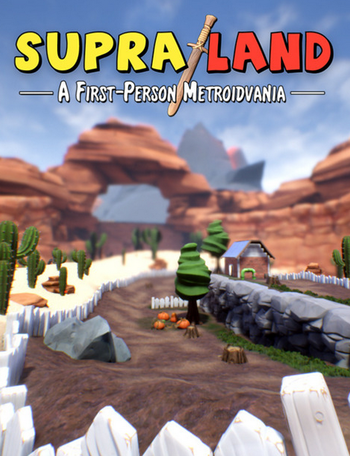 Supraland is an Action-Adventure / Puzzle Platformer game that calls itself a mix of Zelda, Portal and Metroid. It was developed by Supra Games (a two-man team of David Munnich and Alexey Boyko) and released on April 5th, 2019 for PC, after a stint in Steam Early Access.

The key point of the game is that you are playing as a toy in a child's diorama: the trailer does a tongue-in-cheek comparison between multiple square-kilometer maps of games like Grand Theft Auto V or Skyrim and its toy world of 9 square meters. The actual gameplay is mostly puzzle and exploration-oriented, however, with only a limited focus on fighting.