Video Game / Stick It to the Man! 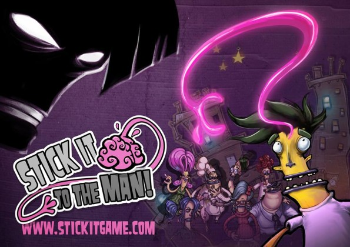 It's a sticky situation...
Advertisement:

Released in 2013 by Ripstone Games and developed by Zoink!, Stick It To The Man! is a multiplatform indie game that combines elements of point-and-click adventure games and 2D puzzle platformers.

In a world where everything is made of cardboard and paper, you are Ray Doewood, a timid, kind-hearted everyman and hard hat tester whose life gets shaken up after being hit on the head by a mysterious object from the sky. While he's unconscious, Ray dreams that he's in possession of a pink spaghetti arm giving him the ability to read minds... but the arm's still there when he wakes up. To complicate things even further, a team of agents working for a mysterious figure known only as "The Man" are hot on Ray's trail and hellbent on retrieving the source of his new powers. If he's going to survive the chase and see his girlfriend Arlene once more, Ray's going to have to use the arm, his wits, and quite a few stickers on a journey through his town, an insane asylum, space, and his own mind.

Yeah, it isn't exactly the most grounded of storylines.

Stick It! uses a gameplay hook similar to that of Paper Mario: Sticker Star; throughout the game, Ray collects various stickers that allow him to change the environment of the game in multiple ways with the spaghetti arm. This and the mind-reading are paired up with Metroidvania-esque levels and a heavy dose of tongue-in-cheek humor, provided from the pen of Ryan North.

Initially released for the PlayStation 3, since release the game has made it to Steam, the Wii U, the PlayStation 4 and Vita, the Xbox One, and the Nintendo Switch. The game's spiritual successor, titled Flipping Death was released 7 August 2018, with North returning as its writer and Ray Doewood coming back in a non-player role... as a ghost.